“Every artist dips his brush in his own soul and paints his own nature into his pictures.” Henry Ward Beecher

When Baba Deep Singh Ji learned about the disturbing news of the attack on Harimander Sahib, he immediately declared his intention of expelling the Afghans and rebuilding the gurdwara. He took a vow not to come back alive without fulfilling this mission.

Baba Deep Singh Ji did ardas while promising to get to Sri Harimander Sahib: "Sir jaave ta jaave, mera Sikhi sidhak na jaave" (If my head is severed, let it be, but don't severe my Sikh way of life)"

Although Baba Deep Singh Ji was seventy-five years old, he still had the strength of a young warrior. He gathered a large group of Sikhs and advanced towards Sir Harimander Sahib. By the time they reached the village of Tern Taran, about ten miles from Amritsar, their numbers had risen to about five thousand. At this time, Baba Ji drew a line on the ground with his khanda and asked, only those who were willing to fight and die to cross the line. All of the Sikhs there crossed the line eagerly. Baba Deep Singh Ji then recited the shabad: "Jo to praym khaylan ka chaao, sir dhar talee galee mayree aao." (Those who wish to play the game of love (follow Sikhism), come to me with your head in your palm.) "It maarag pair dhareejai, sir deejai kaan na keejai." (If you wish your feet to travel this path, don't delay in accepting to give your head.)

Baba Deep Singh Ji was able to continue fighting and reached Sri Harimander Sahib with is head separated from his body. He bowed his head at the prikarma (rectangular walkway) of Sri Harimander Sahib and lay there as a martyr. Baba Deep Singh Ji's shaheedi incited the Sikhs to continue to fight against Mogul oppression for many years. Even today, his life serves as an example for all Sikhs on how to live and die with dignity. 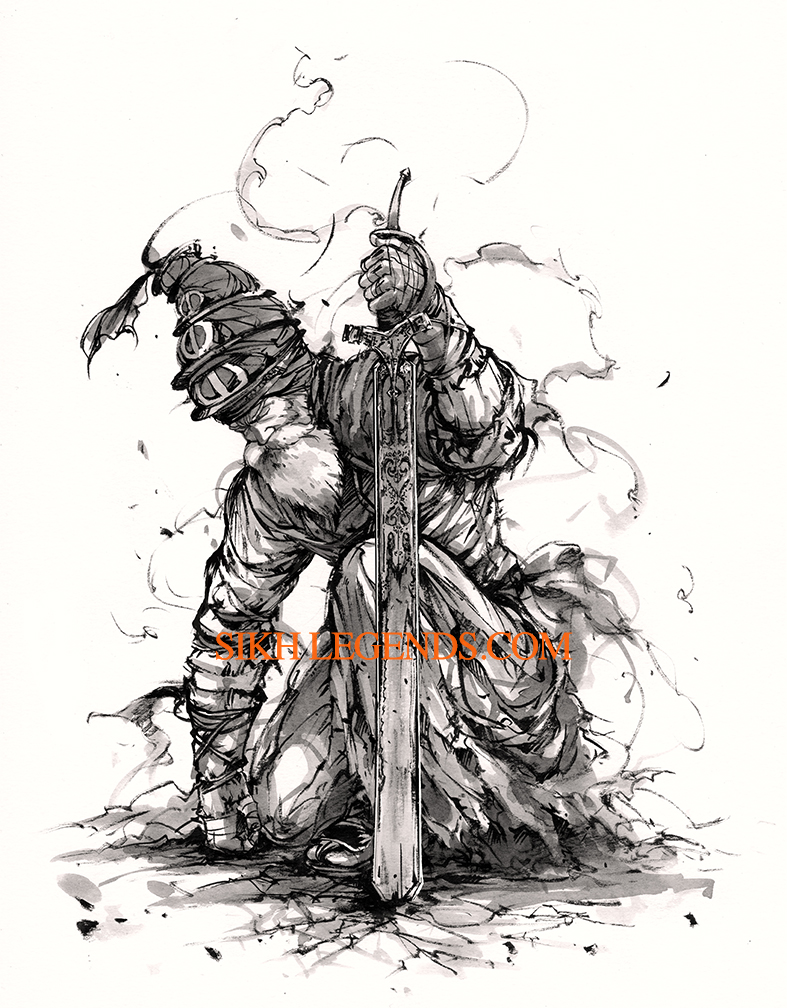 The Battle of Nirmohgarh was fought between Sikhs and the Mughal Empire in 1702.

After the Imperial army was defeated in the bloody Battle of Anandpur (1700). Aurangzeb (the Mughal Emperor of India) himself sent a fresh army under Wazir Khan against the Guru. Wazir Khan proceeded with a large number of troops with the backing and reinforcements provided by the hilly Rajas of the Sivalik Hills.

The battle took place outside Anandpur on the bank of river Satluj at Nirmohgarh. The Mughals attacked Guru Ji from one side and the hilly rajas attacked from other side. The fight continued fiercely for whole day and night and the combined forces were compelled to retreat.

The next morning, the attacked restarted and Guru Ji finding himself greatly outnumbered decided to retire from the place. The enemy troops pursued Guru Ji, resulting in another battle in which combined forces of Wazir Khan & the hilly Rajas were decisively defeated and the imperial army was forced to withdraw after two days of fighting. 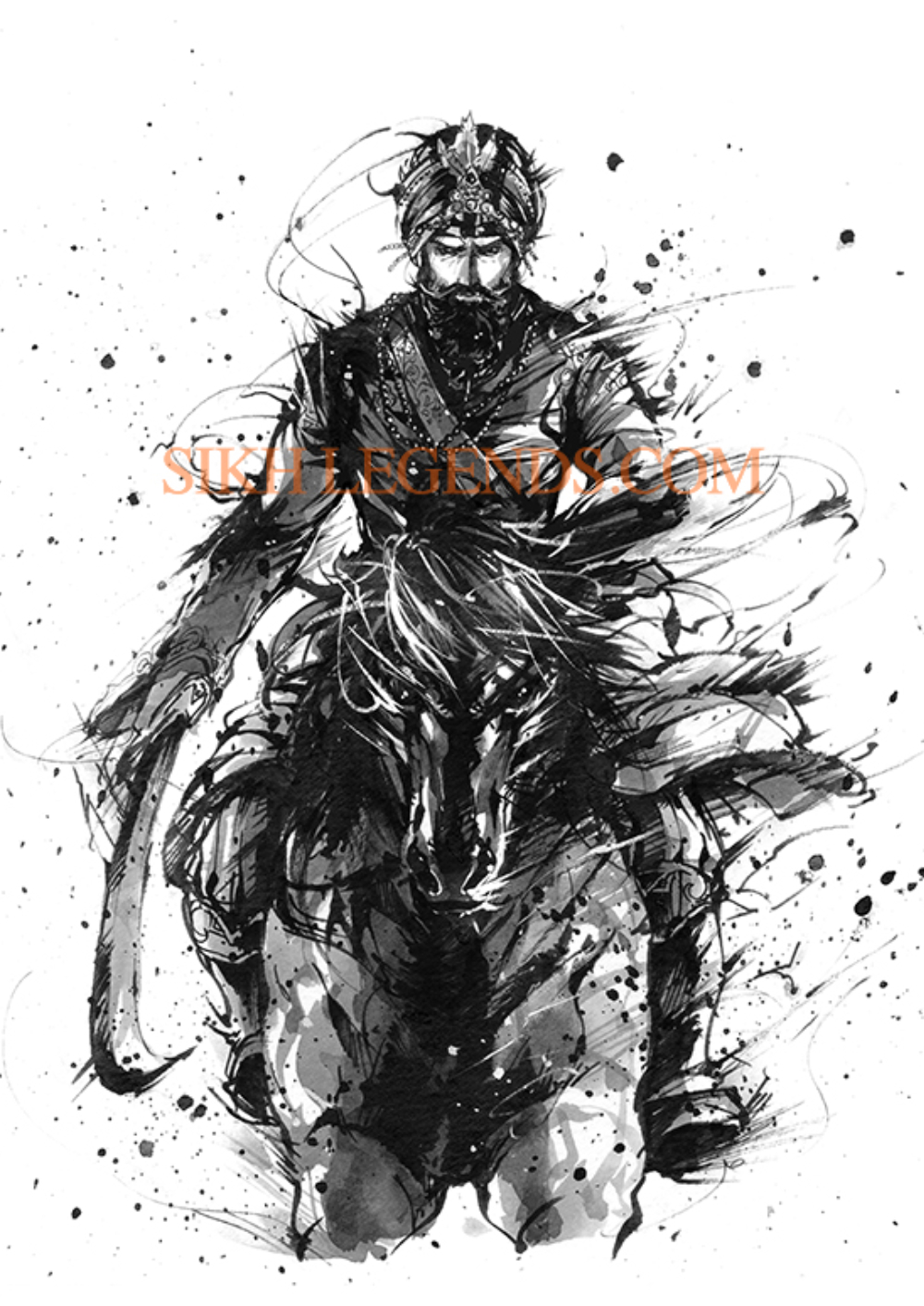 The battle of Nadaun was fought between the union of the kings of the hill states and the Mughals. In this battle Guru Ji supported the kings of the hill states with best Sikhs. The only reason behind it was after developing friendly relations with Guru Ji, Bhim Chand and the king of Bilaspur and the king of the other hill states stopped paying annual tribute to the Mughals. On not receiving any annual tribute Mian Khan sent Alif Khan and the army into battle against Guru Ji and his companions. Alif Khan was defeated after he fled his camp, leaving his belongings and all his warriors.

After the victory of Nadaun, Bhim Chand made an agreement with Alif Khan with the consent of Guru Ji. Guru Ji was deeply hurt by Bhim Chands act of deceit.

Later, Maharaja Ranjit Singh built a gurdwara on the spot where the Guru had pitched his tent. The Gurdwara was affiliated to Shiromani Gurdwara Prabandhak Committee in 1935. It is known as Gurudwara Dasvin Patshahi or Gurdwara Nadaun Sahib.

In 1707, Baba Deep Singh Ji joined Banda Singh Bahadur to fight for the freedom of Punjab. They fought together in the battle at Sirhind - the city in which Guru Gobind Singh Ji's younger sons had been killed. Although the Mughal army outnumbered the Sikhs significantly, the Sikh army was able to easily defeat the Mughal forces.